This weekend, I had a duh moment when it occurred to me that I wanted to try grilling on my Weber Smoky Mountain. I knew that I wanted to make steaks, which I wasn’t interested in smoking, but I wanted that hint of hardwood regardless. My glee was hardly contained when I figured out that I could make that happen with nearly no modification to my WSM.

So, for the evening’s meat, we bought some NY Strip from the local supermarket. Sadly, not quite as thick as I may have liked, but not too bad. I rubbed them down with my version of this rub, which has become my favorite rub for beef thusfar.

From there, I lit a half chimney or so of charcoal, and once they were nice and hot, I added a half dozen chunks of hickory into the charcoal. 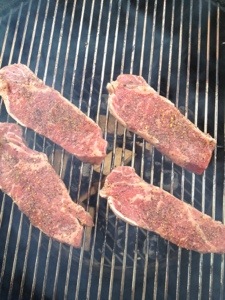 Remove the lid for a while, and I found that i could get the chunks to catch flame. I liked this, as I was able to use the flame to sear the steaks. This picture is obviously from after I moved them, but you get the idea…

I like my steak medium at the most. So, we didn’t leave them on for very long. Probably 8-10 minutes. But we still had a delicious combination of spice, smoke, and meat.

If you’re here, chances are good that one of the reasons that you’re here is meat.

Yes, Meat. It’s not unlikely that the meat is one of the things that drew you in to the abyss. There are a few things that I make that have been exceptionally well reviewed. One of them, is pulled pork. But, as an open source kind of nerd, I’m more interested in “standing on the shoulders of giants”, so I’m likely to share everything I’ve got. It’s not particularly likely that I’m going to compete with you over BBQ, and if I do, at least I know that I had a hand in beating me. 😉

So, I’m going to start with my favorites. And my favorite pork rub can be found right here. Chicago Style Ribs. I first saw this as an episode of Cook’s Country on PBS, but you can get the actual recipe at upyourflavor.com. This tends to be my “go to” rub for pork. Doesn’t matter what cut, this is the first thing that I consider. Now, in fairness, I take a few liberties with this particular recipe. First, I tend to be a lot heavier handed with the cayenne. I like my food to have a bit of a bite to it. So, I tend to crank up the cayenne from 1 tsp to 1 tbsp per recipe of rub. Obviously, it’ll take a lot more rub for pork shoulders or Boston butts than it will for a rack of baby back ribs. Plan accordingly. But, I’ll usually make three or so recipes for a shoulder. And then, I’ll often times make more for the sauce. The sauce is delicious of its own right. But, put them together with the pork? Heavenly. In fact, I was advised when I first moved in here, that I would not be permitted to compete in the Snob Hill Rib Off. Cancelled this year. Coincidence? 😉

A couple more important tips about pulled pork. I understand that you don’t like dry meat. You still need to cook it to over 190°F. Otherwise, it’s going to be miserable to pull. I like my meat smoked primarily over hickory. Yum.

Another tip? Pick up a “RoMan Pork Puller“. After making, and manually pulling, NINETY pounds of pork over a span of three weeks, I had NO interest in pulling any more pork by hand. So, I got this nifty little contraption that does it for me at the end of my cordless drill. Leaves me more time for my other love. Currently, I’m enjoying the hell out of some Great Lakes Burning River, which is a Pale Ale style brew. Full of hoppy goodness.

What’s on the menu for you this week? I want to do some chicken up a bit differently than normal. I’d love to hear suggestions, if you’ve got ’em. Otherwise, stay tuned, and I’ll fill you in on what I decided.

I'm a thirty-something IT guy with a great affinity for good food, good beer, good technology, and good process.